Part of the "Myth Busting" series

Core muscles - a concept we're all very familiar with. But what does it mean? What comes into your mind when you hear that term? Do you think of abdominal muscles? Maybe even specific muscles like the obliques/transverse abdominis (TA)? If you're quite advanced you might also say that the back extensors contribute to core strength. If you're a core strength super-hero then you might also include the pelvic floor and diaphragm (fancy!)

And everyone knows that a weak core causes back pain, right? Because you've got to have really strong muscles to support your spine. Or sometimes, the muscles are strong but they've somehow become inactive or "switched off". Chances are if you've ever been to any kind of manual or physical therapist, exercise class or boot camp you've been told all this. Well, this is the myth we will be busting today!

What are core muscles?#

Firstly, when people describe the "core" muscles this isn't a term that you'll find in any anatomy text book. It doesn't really describe one particular structure. Instead it describes a whole group of structures which are thought to do a roughly similar job, ie. move or stabilise the trunk. The core muscles are often described as a "protective ring" around the spine. But as you can see from the picture, they don't actually form a ring at all.

Does core muscle weakness cause pain?#

So how did these muscles first become associated with back pain? Various studies done in the last few decades on people who have persistent lower back pain showed a reduced level of activity in these muscles, particularly the TA. It was concluded that this inactivity in the muscles caused them to be weak, and that had ultimately led to back pain due to a lack of stability in the spine.

Sounds reasonable. But, as we mentioned a few weeks ago, correlation does not equal causation. From what we know now about back pain, it's actually much more likely to be the other way round - that pain inhibited the activity of muscles in the area as part of a protective mechanism. The researchers also assumed that pain is a result of instability, but again in many cases the opposite is true - back pain is more often a result of immobility/inflexibility. The painful back is often moving too little, not too much.

There's a very prevalent idea in manual therapy/the fitness industry now that muscles can "switch off" somehow. That muscles which used to be really good at doing what the brain told them to do have, for some reason, now stopped listening. It would be easy to imagine them sitting flaccidly about not contributing at all. But there's not any evidence to support this idea.

Muscles don't just switch off and become completely useless. In fact, muscles don't really exist in an on/off state. Sometimes a muscles will be relaxed, sometimes it will be at full contraction, but most of the time it will be somewhere in the middle playing a supportive role.

Muscle activation will vary from person to person, from day to day, from activity to activity. Immediately after an injury, it's normal for muscle activation to temporarily go down.

Do I need to brace my core?#

We're very often told that bending your back is dangerous (see my previous post), and that we need to tense our abs and back before moving our spine. But honestly, stiffening your spine like this all the time is really unnatural. Some research done in 2006 (on an admittedly small group of participants) showed that the back muscles, and some of the muscles of the abdominal wall, actually relax on bending. The researchers concluded that this was for 2 reasons - to allow for full and smooth movement of the back, and to shift weight bearing onto the passive structures (ie, the bones of the spine and the discs).

Before you start to panic about putting weight through the bones of the spine and the discs - this is exactly what your spinal bones and discs are designed for. They are inherently strong and robust and can do this job just fine without the help of your muscles. 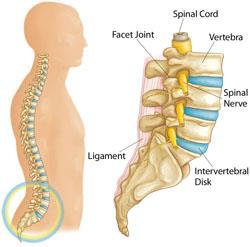 Just look how chunky your spinal bones and discs are! They're designed to be super strong and able to carry heavy loads.

In addition, bracing your core unnecessarily could actually lead to more pain. Imagine if you walked around with a clenched fist all day. Wouldn't your arm and hand start aching after a few hours? Same with your back.

Why does my gym instructor keep telling me to brace my core?#

When you're doing an exercise class, gym instructors will often say something like "brace your abs", "pull your tummies in", "core tight". There are two good reasons why you might want to brace when exercising.

The problem is that the fitness industry often gives the impression that bracing your core will protect your spine. As we've already discussed above, bracing is not protective - if anything it will cause more pain.

Should I get a "strong core"?#

If you want. But does everyone need a strong core? No. As long as you can stand up your core is doing its job just fine.

And the great news is, any kind of exercise will help your back pain! Find yoga boring? Get some dancing shoes and salsa your way out of pain. Hate the gym? Get a mat and find some Pilates on YouTube. Swimming not your thing? Ditch the trunks and grab some boxing gloves. It's important to be consistent and patient, so find something fun enough that you'll be doing it forever!

See other posts in the "Myth Busting" series