If you're a bit squeamish you might want to skip this paragraph, because earlier this week I managed to slice into my thumb with a chopping knife while I was preparing dinner. The cut is reasonably deep and it bled quite a lot, but happily it is now healing nicely, even though it looks like a bit of a Franken-finger.

But it got me thinking about the healing process and how amazing it is. Specifically, it reminded me of a big debate that happened in the Sports Science arena several years ago on the best way to treat acute sporting injuries. Until then, the standard treatment had been known by the acronym RICE: Rest, Ice, Compression, Elevation. All of these actions were specifically targeted at reducing inflammation.

Most of us would be able to spot inflammation if we saw it - it's typically red, swollen, hot, sore and (if it occurs in a moving body part) stiff. It's the current state of my left thumb. But what is actually going on behind the scenes to create this inflammation?

Firstly, your body responds to some sort of stimulus, such as a bacterial infection or an injury, by releasing chemicals called inflammatory mediators. These chemical control how much inflammation you get and how long it lasts. It directs the different stages of healing which are:

The important thing about the healing process is that it must occur in this order. You can't have new structures being made in step 4 only to be broken down by the immune cells in step 2. Equally, you can't have blood vessels becoming leakier in step 2 before any blood loss has been stopped in step 1.

So looking back at the RICE method I mentioned earlier, it's clear that each of these steps was designed to reduce the initial inflammation so that swelling and pain would not occur. But given that each step is crucial to the one afterwards, reducing inflammation in its early stages would actually hamper the following stages of healing.

So instead of RICE, try MEAT: 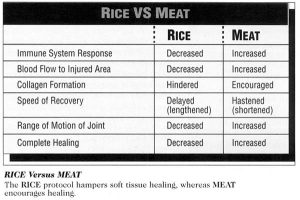 So next time you injure yourself and you see inflammation, don't panic and reach for the ice, remember instead that your body is doing the amazing process of healing itself.

See other posts about general health